On Friday, December the 12th 2014, i took my cameras, lighting gear and zoom digital recorder and i headed to my friend Elijah’s place in order to give him a helping hand with a very important project of his. Elijah Renard, a trans-masculine person, currently has a campaign set-up on Indiegogo in order to help him get funding for a very important chest reconstruction surgery. Please have a look at the ‘Free Kitties’ page and support his campaign by donating today!

The idea of filming the interview with Elijah and editing the video for the Free Kitties campaign got me very enthusiastic. This sort of project is exactly the kind of socially-conscious project i truly enjoy working on. I feel strongly about the importance of differences in people and culture making a positive difference in our society.  And so, when the opportunity came up to promote these values, i immediately felt compelled to help Elijah out by offering my time and talents as a video editor and marketing artist.

In retrospect, i had a great time creating what would turn out to be a three part interview. The filming took place on a Friday evening and the following Saturday afternoon. The first part of shooting involved a few hours of interview with Elijah as he relaxed on his sofa, telling his story, with the occasional interruption by the cats roaming the apartment or by a very quiet and patient roommate. 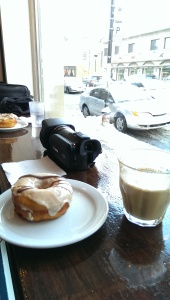 Coffee, camera and donut at Café Odessa on Beaubien street in Montreal

The second day, we met at Café Odessa on Beaubien street in Montreal. We had originally intended to meet at the restaurant next door for a late breakfast, but there was such a big crowd, that we decided on coffee and donut instead. I was happy with the visuals i got from the weekend, although it was a bit cloudy and this red head kept walking by with her bicycle to get in my shots.

Post Production went by relatively smoothly. Initially, i had complemented the visuals with some dramatic intro music that i had composed a few weeks back. Regrettably, the music just didn’t work with Elijah’s pixel art which conveyed a much more positive and light hearted impression. Thankfully, i quickly came across the SoundCloud page of Eric Skiff, 8-bit music composer. I really liked the song entitled ‘Underclocked’ and went with it. Have a listen on his page!

Watch Episode 1 right now on vimeo! Don’t forget to activate the ‘CC’ at the bottom right if you want to see the english subtitles. Feel free to go and have a  look at the photos from the weekend shoot in my Flickr album. If you wish to pledge your support to Elijah Renard’s Free Kitties campaign, please go visit his Indiegogo page today! As always, visit my online portfolio at www.ericzone.com and visit my professional Facebook page and click like in order to keep in touch.